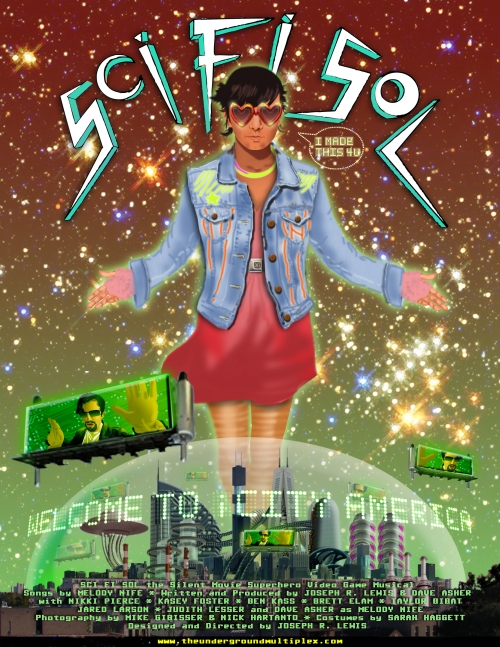 THE SCI FI MUSICAL ADVENTURE SERIES!
Emily, a lonely designer, finds herself in the middle of a fantastic and dangerous adventure when her most recent creation, the super hero rock star Melody Nife, comes to life!

SCI FI SOL is adapted from the album of the same name produced in 2003 in Amsterdam by indie electro-pop wunderkind MELODY NIFE. Originally conceived as a soundtrack for an imaginary science fiction epic, SCI FI SOL (The Movie) was a dream nearly abandoned  before MELODY NIFE met underground moviemaker JOSEPH R LEWIS while they were both touring the United States performing educational theatre for schoolchildren. JRL & MN began a close friendship and occupied idle times by discussing what a possible SCI FI SOL movie adaptation may look like. After many years of daydreaming, they agreed to undertake the mission of creating “the most epic no-budget science fiction fantasy of all time.”

SCI FI SOL was shot as a silent movie and uses the original album of music, played from beginning to end, as the entirety of the movie’s soundscape.

LISTEN 2 THE ORIGINAL ALBUM on iTUNES

This site uses Akismet to reduce spam. Learn how your comment data is processed.