Joseph R. Lewis, director of Scumbabies and co-director of SCI FI SOL, will be on hand tonight to host Facets’ latest descent into cinema dementia, The Beaver Trilogy directed by Trent Harris.  The first of the trilogy is the life-changing meet with aspiring entertainer Richard Lavon Griffiths (aka “Groovin’ Gary) in a parking lot in Beaver, Utah. The subsequent two shorts are dramatizations starring then unknowns Sean Penn and Crispin Glover as Groovin’ Gary performing as Olivia Newton John.

Harris’ trilogy has been a cult favorite and popular bootleg trade ever since its creation in the mid-1980’s. Come on over tonight at midnight to Facets (1517 W. Fullerton) and check it out. I’m told there’s going to be a surprise, so if you miss it–weep, weep the mighty river.

AND…don’t forget! Next Saturday, the world premiere of SCI FI SOL at CIMMFest!

Filmmaker Joe Lewis will be interviewed about his film work and the philosophy behind The Underground Multiplex this coming Monday 8pm at High Concept Laboratories. This will be part of The Monthly Visit with Kevin O’Donnell, who will also have Beer Geek Steve Howard, mime Dean Evans and music from Josh Bell & The Visitors. RSVP to RSVP@highconceptlaboratories.org to attend.

The Underground Multiplex last year released its debut film Sisters of No Mercy 3D during a special screening at Facets Multimedia in Chicago. Clocking in at 100 minutes, many were surprised that we actually spent so little making the movie. But not only was the film no-budget, it was also interactive, meaning that during many portions of the film, actors would appear in person before the screen, interacting with characters in the film. In this manner, Sisters of No Mercy was a true 3D experience, all with a budget whose major expenses were a few costumes, props and gas money to and from Madison, WI for a film shoot. I’m certain there are many ways to make movies on the extremely cheap, but here are the major factors that helped this particular feature:

Hire your friends and family

This almost goes without saying since these folks will probably be in your film for nothing (except film credit), but there’s an additional point to be added.  I deliberately left out anyone who I would consider a prima donna, an irresponsible person, or in general anyone who I thought might be a bring-down. Also, if you are the producer and/or director overseeing the project, don’t be a jerk. Making sure that everyone is having a good time not only made things pleasant, but also guaranteed much shorter shooting times for a cast and crew who have very busy schedules.  Worried about acting abilities? Unless you are trying to make something monumental, profound and incredibly intense–all of which would probably require a higher budget anyway–the actors’ experience won’t be as important as your script. If you have a good script and ideas, people will take notice. If you have a bad script and bad idea, people will take flight.

I could not imagine asking friends to give up some 7am Sunday mornings without feeding them. Get those carbs in them, as they’ll be busying burning them up with coffee and tea to wash them down. We didn’t have to get elaborate. A discount place like Aldi’s can be your best friend for your shoots.  If you shoot at your house and create your own meals for your cast/crew, all the better. (Exnay on the alcohol, though). They’ll be impressed!

Let Your Friends Loose to Do Their Things

Joe Lewis is the most brilliant filmmaker I’ve ever met. He and I have been able to craft a feature length film utilizing the talents of cast members by making the script malleable enough to include them. For instance, I know a guy who is a great dancer and whose lifelong dream is to be a choreographer. Sisters of No Mercy 3D was not originally scripted to include dancing, but he and a few others with some dance experience were gung-ho for it. We simply provided a music piece he could use and stood back to let him do his magic.  Creating scenes in this manner, I found, not only makes you double up on your imagination, it gives those in the film a true sense of investment in it.

Use the Proper Equipment with a Steady Hand

A seasoned filmmaker can use equipment like a Canon Vixia HD cam for shots and do so pretty incognito, which helps in filming at great locations all around Chicago. But if you want to have something that doesn’t look like unintentional earthquake, you’ve got to be able to do so quickly and with a steady hand.  This became important for our guerrilla filmmaking, since there were situations where time was short and using as little equipment as possible was necessary.

The Internet is Your Friend

If you haven’t begun figuring out how to incorporate some of the great stuff on youtube or sites like archive.org into your works yet, I suggest you start, especially if you want to save cash.  You can make your work an interesting mosaic of sounds and images with those sites, plus save lots of money by  properly administering the Fair Use law when editing.

So get to it! Sisters of No Mercy 3D was created while one of us was unemployed and the other had a minimum-wage job. It can be done.

The Underground Multiplex held a cast/crew party on Feb. 1st for the first-ever showing of Sci Fi Sol, the exciting new feature making its public debut at CIMMFest on April 13th.  (It’s a great festival of movies and music. Go here for more info).

The 40-seat screening room at Facets Multimedia filled up twice for our event, livened by a nicely decorated reception by Jenny Grist.  We were quite pleased

with the response.  Most of those associated with the film were able to make it including Taylor Bibat (pictured below), who played “Violet Raygun,” one of the laser-toting, video game gals in the movie.

TUGM regular Lielie Kaehn-Jarvis was on hand to provide sci-fi glam makeup to  visitors. We had some takers (thank you, folks!). She also provided the great make-up of the zombie prostitute dancers of Sisters of No Mercy 3D. 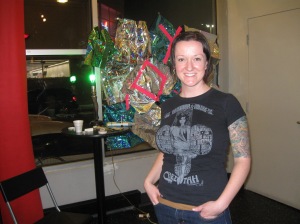 Our thanks to all those who came out that great night! To everyone else: you’ll be able to enjoy the fun of Joe and Dave Asher’s great film along with Dave’s live performance at CIMMFest on Friday, April 13th.  Buy your tickets here!

In our pre-show show kickoff, Joe Lewis and Lew Ojeda discuss how they got together forming The Underground Multiplex. Also, they talk about how the first year went and the exciting things in store for ’12.

TUGM presented the cast and crew premiere of SciFiSol last night at Facets Multimedia. In attendance was my pal Nate Wells, who loved the film so much he went right home and laid down this crazy, bizarre track. Me likey!

The Underground Multiplex
Create a free website or blog at WordPress.com.