LL:  The Cannibals has been rarely shown in The United States. Could you tell us a little about the film?

MS:  The Cannibals is one of the very best films of Manoel de Oliveira who is 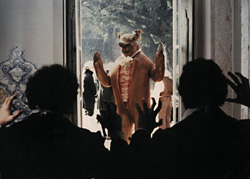 one of the world’s greatest living directors. Oliveira is best known in America not for any specific films but rather for having a freakishly long career. He directed his first film in 1931 (in what was still the silent era in his native Portugal) and he is currently in pre-production on a new film at the age of 104. But the movies themselves, which are made in conscious opposition to Hollywood conventions and have not been widely distributed in America, are great: they tend to be rigorous, deliberately paced literary or theatrical adaptations centered on the theme of doomed love. I think The Cannibals is an ideal introduction to Oliveira’s work because it shows off his playful side: it’s funny, surreal and very subversive. It shows the strong influence of Luis Bunuel.

LL: How is The Cannibals a bridge between art house cinema and midnight movies?

MS: I would describe it as a midnight movie disguised as an art film. I think it was brilliant of Oliveira to tell this particular story as an opera. It’s an adaptation of a 19th century novel but he hired a contemporary composer, Joao Paes, to write an original operatic score and libretto. Literally every line of dialogue in the movie is sung and the score is excellent. However, the film becomes weirder and weirder as it goes along until it reaches the climax, which is totally insane. I think Oliveira chose to work with the form of opera because no other artistic medium is so closely identified with the upper class — the true subject of his satire. He’s making fun of his target audience! Without giving anything away, I would say he wanted to cloak his movie in the semblance of respectability and “high art” in order to deliver a kind of sucker punch at the end. I almost want to compare The Cannibals to Takashi Miike’s Audition in terms of how it works. (If you’ve seen that film you know that it lulls you into a state of near-boredom before presenting a mind-fuck of an ending that is effective precisely because of what comes before.) I also hasten to add that it’s not necessary to understand anything about opera to appreciate this film. I myself know little about opera.

LL: Were there any other operas commissioned directly to cinema?

MS: I’m not aware of any. It’s very rare to have any kind of musical film in which all of the dialogue is sung. Les Miserables is an obvious example but that’s, of course, an adaptation of a well-known musical play and had a built-in fanbase. The only other film I can think of that comes close to fitting the bill is The Umbrellas of Cherbourg. Jacques Demy commissioned Michel Legrand to write the original score and Demy himself wrote the dialogue, all of which is sung, but the style of the music is not that of an opera. So I think Oliveira’s achievement is singular and highly innovative.

LL: What do you wish to accomplish by presenting The Cannibals to a crowd accustomed to exploitation, sexploitation and violent trashy films?

MS: I’m glad that you asked. I hope to broaden viewers’ horizons as to what their perceptions of a midnight movie is. The Cannibals is not exploitative or trashy and yet, in a lot of ways, it’s far weirder than many of the movies to which those labels are often attached. This film is so odd, in fact, that I myself don’t even know how to fully process it! This is also a big part of the reason why I want to show it: presenting it to an audience will hopefully inspire everyone present to work together in making sense of it in our discussion afterwards.

My thanks to Michael Smith for the interview. You can read his posts on the blog White City Cinema. It’s definitely worth your time.
Come feast your eyes and ears on The Cannibals at Facets Night School.
Saturday night April 27, 2013 at midnight
Facets Multimedia
1517 W Fullerton
Chicago, IL 60614
Admission: $5, FREE for Facets members! Become one here.