THE END…A Thanks and a New Beginning!

And changed our name

Eight years ago, I co-founded this website with the hope of influencing, in some small way, how we look at movies and entertainment. I’ve long been a fan of the unusual in movies, music, TV and other media. The Underground Multiplex was to become an outlet for that expression and to give a voice to film independents often lacking in media. When we created content, we kept consciously in our minds the phrase “free media,” not just because we were not charging for anything we would have posted, but as a call for eliminating the restraints of corporatism on those creating content for the Internet and for larger screens.

During these years, we took every chance we could to get our message out. In so doing, we accepted tasks beyond our original intent of creating content and towards the goals of helping other creators get noticed and not get lost in the rush for the “brand new thing.” The life work of local artists, we felt, needed attention before the fog of obscurity hid them forever. Entertainment venues with glorious histories needed to be saved and those with sordid histories needed staff changes or to be closed.

We’ve hosted award-winning film programs centering on underrated, underappreciated and just plain bad-ass strange movies. We’ve presented primitive podcasts to give voice to independent artists and filmmakers, along with their admirers and tireless supporters. We’ve even attempted a radio comedy show and aired a few episodes.

We’ve accomplished a great deal, but I feel it’s also time to expand our reach, have a more concentrated approach with a fresh site and changes to what we do.

Our new website (currently under construction) and name will be THRILLO PAD PRODUCTIONS. The name comes from the location of where the two co-founders, myself and Tyler Pistorius, currently live.

Thrillo Pad Productions (TPP) will concern itself primarily with content production. Tyler is currently working on a short film and feature film. I am currently in post-production for the political comedy album, “Donald J. Trump: A Very White House Con Job.” My main concentration for TPP will be the production of “Vital Indie Media,” the vlog podcast centering on the unusual movies, music, TV shows and other ephemera in my collection. In the future, I will continue interviewing those who make a difference locally creating great art, music and movies.

So with this post we say goodbye to The Underground Multiplex and welcome to Thrillo Pad Productions. If you’ve been following us here on Facebook or on Twitter, please join us on our new Facebook page. We will announce there when the new website is up and running along with more social media connections so that you can join us in our further adventures!

It seems appropriate to make this announcement on Thanksgiving Day, because I give thanks to everyone who has made TUGM a great blog for the last eight years. Thank you all so very much and now let’s go on for many more years at Thrillo Pad Productions! 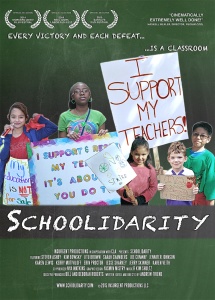 Over the last few years, teachers unions in Madison, WI and Chicago, IL have been under attack from political forces with a privatization drive. Wisconsin governor Scott Walker fought for a right-to-work law, which union claim would undermine the power of collective bargaining guaranteed by law. Chicago mayor Rahm Emanuel showed a consistent disdain for the Chicago Teachers Union from the moment he took office.

Documentary filmmaker Andrew Friend, an unapologetic supporter of teacher unions, created a new documentary recounting the struggles in Madison and Chicago over the last few years.

The film Schoolidarity is a reminder of what can be accomplished with collective action and what it means to be in a struggle for the long haul.

I interviewed Andrew via Skype for the latest installment of Mediatrocities. Give a listen and please comment and/or share with others!

Ben Hicks, co-founder of Fandependent Films, joins me in the latest podcast to talk about his site, the state of independent films and whether it’s possible to have cottage industries of film.

Check out Fandependent Films, where you can watch a brand new movie every day and become a fan of your favorite ones. Becoming a fan supports the site and the filmmakers.

Listen to the podcast:

Mediatrocities #17: Interview with John Rangel, director of “Remember Our Days”

Legendary Lew interviews filmmaker John Rangel (The Girls on Liberty Street) in the latest episode of “Mediatrocities.”  Topics include the projection of stereotypes in Hollywood cinema, independent film, and Rangel’s upcoming film Remember Our Days.  This film is currently seeking crowd-funding via Seed&Spark.  Click on this link to visit the page and contribute to the project.

This episode is NSFW 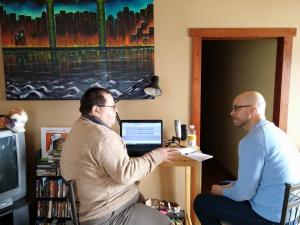 TUGM will soon have a complete podcast of my interview with filmmaker John Rangel, director of The Girls on Liberty Street. He’s raising funds for a new independent feature called Remember Our Days set to be filmed in Aurora, IL. In this snippet from the interview, John and I discuss why it is that Hollywood characters can live way beyond their means and why audiences passively allow this ruse.

As with all Mediatrocities podcasts, this audio exchange is NSFW.

Head on over to Seed and Spark and support John’s quest for a workable budget. There’s 11 days left, so please spread the word! Support indie cinema!

TyPi joins me in the latest installment of “Mediatrocities,” the podcast of unusual media.  In this episode, we make an open request to Criterion DVD, asking them to take on our choices of films deserving top notch releases. The second segment is our tribute to the late great Leonard Nimoy, centering on his media work that was not Star Trek.

Give a listen and as always, this podcast is NSFW.

Included in the podcast is the audio for a Priceline commercial, the video of which is here: 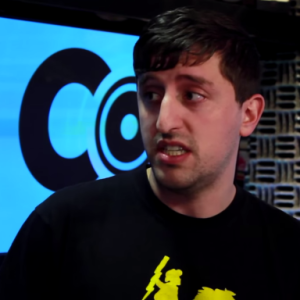 Dominick Suzanne-Mayer of Consequence of Sound and The Kelly Affair

This week’s episode of Mediatrocities marks our 4th (and perhaps our last?) look at the Razzie Award winners! TyPi is on hand for commentaries, as is our very special guest, film analyst & writer Dominick Suzanne-Mayer, contributor to Consequence of Sound and The Kelly Affair.

Among the topics: What’s the deal with Saving Christmas, its unnecessary continued exposure for Kirk Cameron and the general inept storytelling of modern Christian-themed movies? Can Michael Bay get anything cinematic right? What was Lew’s choice of worst 2014 film. What’s the lasting effect of the Sony Hacks and is it affecting Hollywood and even Razzie voting?

Give a listen and share, but mind you, it’s NSFW:

The Underground Multiplex
Create a free website or blog at WordPress.com.